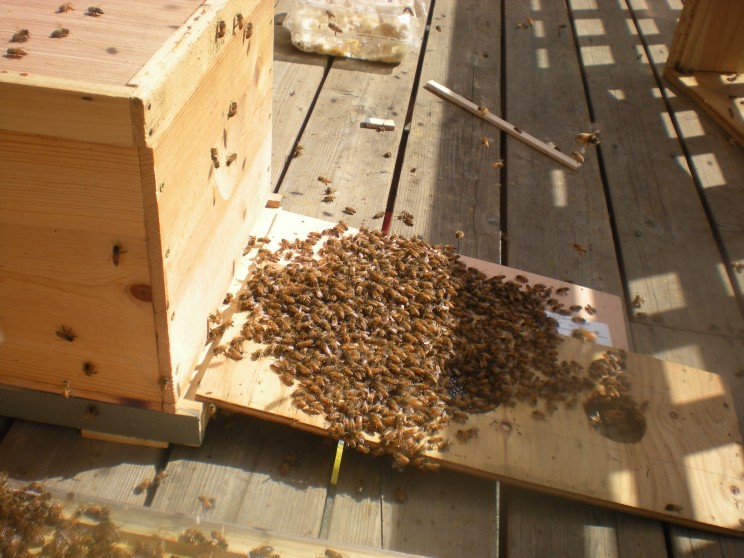 Thought I would share this learning experience.  I had a hived package that was not inspected for a couple of weeks.  Shoddy beekeeping on my part, since the colony was likely queenless for most (all?) of that time.  Everything seemed fine on first approaching the hive for the late first inspection; bees were active and bringing in lots of pollen, so I assumed that all would be well.  I saw some eggs but the queen was no where to be found, which was unusual since they are fairly noticeable in small colonies.  On closer inspection (had to put my reading glasses on here) I noticed that some of the cells had multiple eggs (3 or 4 at times).  In fact most cells had multiple eggs laid down in random arrangements…  It became clear that workers had started laying eggs in the absence of the repressive effects of brood-pheromone.  No queen- no eggs – hence no brood or brood pheromone – therefore workers lay eggs.

I was not sure if I could introduce a new queen at this point.  Although I saw no brood, colonies with laying workers can behave as though queen-right and will  ball and kill an introduced queen.  I therefore decided to shake out the colony in front of a rather weak nucleus to combine the two colonies.   The nucleus had a laying queen and some brood which should repress the egg laying tendencies of the problem workers.  As an extra precaution, I caged the nucleus queen for a couple of days in case she was overwhelmed by the much larger “invading” population.  Not sure I needed to do this but the queen was laying out well with the enhanced population a few days later.